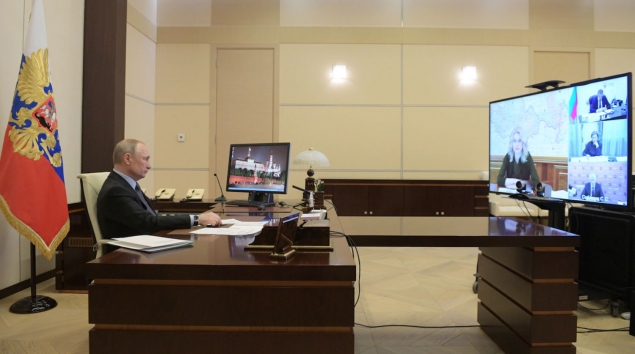 Opinion polls and authoritarian systems don’t go together. However professional or independent the pollster, any results are necessarily skewed as people weigh their responses — especially to questions about the regime — against potential consequences. Political scientists refer to this as “authoritarian bias.” A late 2015 poll by the Levada Center, Russia’s most reputable polling agency, found that 26 percent of respondents were afraid to answer political questions — and this was just those who were not afraid to admit their fear. And then there’s the perception of prevailing social trends artificially created by government monopoly on television — in Russia’s case, for nearly 17 years now.

These caveats make the outcome of two major studies recently published by the Levada Center all the more striking. The pollsters wanted to gauge Russian public opinion about the one non-pandemic story dominating the news here for the past month: Russian President Vladimir Putin’s intention — long known, but now openly stated and officially approved — to remain in power past 2024, when his current term is supposed to expire.

Despite all the polling constraints, this prospect has divided Russians in half: 48 percent approve of the amendment waiving presidential term-limits for Putin, while 47 percent disapprove. Even more revealing — as the survey question did not mention Putin’s name directly — were attitudes toward the idea of imposing an age limit on the presidency. Fully 58 percent of Russians say the head of state should not be older than 70. By the time of the 2024 presidential election, Putin will have turned 71.

Beyond the headline figures, Levada’s pollsters draw attention to the fact that, while it is still true that younger, more urban and more educated Russians tend to be more opposed to Putin’s regime than older, rural residents, that gap is beginning to close — especially on the question of the age limit, the safe euphemism for opposing Putin’s continued rule. “There are two different oppositions to Putin in Russia,” wrote Kirill Rogov, a prominent political analyst. “One comes from forward-thinking and liberal residents of large cities, the other from depressive and impoverished provinces. Their agendas and expectations are so different that they are usually not able to speak with one voice. But it seems that, on this issue, they are.”

The discrepancy between official reports and the reality, now confirmed by polling, has long been apparent to the Kremlin itself. The most obvious example of this is Putin’s long-standing fear of competition at the ballot box — or, indeed, of facing his citizens in any format. In one of many similar revelations, a BBC investigation this month confirmed that Putin’s impromptu meeting with passers-by on the streets of St. Petersburg was in fact a carefully staged event. The “regular people” who took part were actually local officials, members of Putin’s United Russia party and paid employees of Yevgeny Prigozhin’s troll factory.

It is hardly surprising, then, that the Kremlin refuses to submit its constitutional changes to a referendum. Such a format, as codified in Russian law, would provide for a minimum turnout and campaigning by both sides, as well as independent and international observation. Add the poll results, and it becomes clear that — even with his long experience of ballot fraud — Putin would have stood a significant chance of losing.

Instead, the Kremlin is planning an ill-defined and extra-legal “popular vote” that officials — including Putin himself — increasingly refer to as a “plebiscite,” a concept favored by European dictatorships in the 1930s. The rules announced by the Central Election Commission allow for unrestricted campaigning by the state and limit observation at polling places to government-approved monitors. Even with all these tricks, however, the vote could still end up posing a challenge. The scale and audacity of the fraud could, for example, provoke a repeat of the 2011-2012 street protests that followed a heavily rigged parliamentary election — especially against the backdrop of an economy hit by the coronavirus pandemic, with Russia’s gross domestic product projected to fall this year by 10 to 20 percent.

The main problem for the Kremlin, though, lies in the years ahead. For a large part of Russian society — primarily those who had been loyal to the regime — the decision to waive term limits after Putin’s repeated assurances not to do so came as an explicit breach of trust. Analysts have compared it to then-Ukrainian President Viktor Yanukovych’s refusal to sign an association agreement with the European Union in 2013 after promising to do so — a U-turn that led to his subsequent ousting in mass street protests.

“We are now at a crossroads,” Rogov noted. “There are countries like Kazakhstan or Uzbekistan where societies have accepted a limitless presidency. Russian society is unlikely to react the same way. … In the coming years, this amendment will have the same effect as Article Six had in the final years of the USSR, when it became … a consolidating factor for the opposition.”

Article Six of the Soviet constitution enshrined the Communist Party’s status as the ruling (and only) political party. After a rising wave of strikes, street demonstrations and successive electoral victories by opposition leaders demanding its repeal, the Soviet parliament finally abolished the restriction in early 1990. But by then, the regime was already out of time.