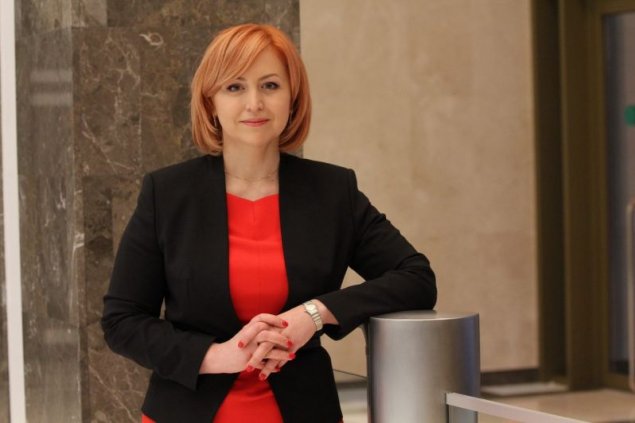 Oxana Domenti, Dodon's (Moldovan Socialist President Igor Dodon) relative and the friend of the Prime Minister Ion Chicu holds concurrently, in violation of all the legal and diplomatic protocol norms two representation functions: the one of the Ambassador of the Republic of Moldova to the UN and to Switzerland and the other one is the Chief Advisor to the Regional Director for Europe of the World Health Organization.

On the surface come shameful details for the diplomacy of the Republic of Moldova in the context in which the Foreign Ministry has agreed to offer an Ambassador leave on his own for 2 months (see below the order that was registered much later since its issuance because the letter "a" at the end of the registration number shows that this document was registered post-factum). 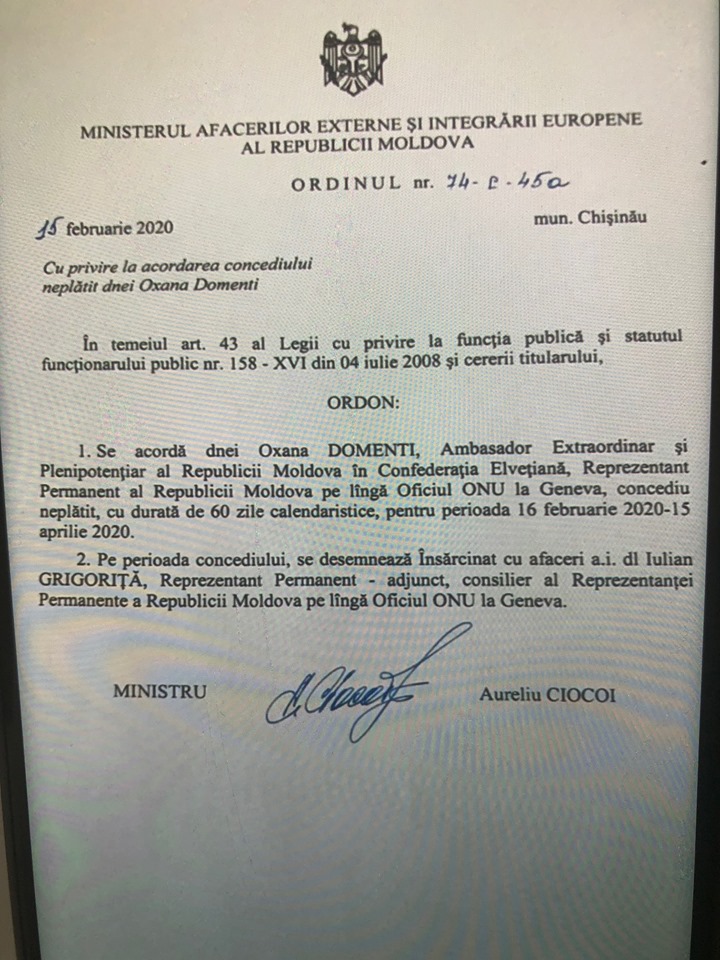 The Ziarul de Garda writes that Ambassador Oxana Domenti only this week submitted the request for resignation from the diplomatic function in the context in which for 2 months she has already moved to Copenhagen where she is most likely working for a probationary period in an international function which she obtained not by contest but by political appointment in the cabinet of the new WHO Regional Director for Europe, Dr Hans Henri Kluge.

What is the explanation by the Foreign Ministry, the Government and the Presidency, Oxana Domenti on March 5-6 was presented on international sites as a WHO official, while formally still being the Ambassador of Moldova to the UN and to Switzerland? When was her request for resignation registered?

Former Minister of Foreign Affairs and European Integration, Aureliu Ciocoi, has secretly signed a leave of absence on his own for the Ambassador of the Republic of Moldova to Switzerland, Oxana Domenti for 2 months (February 15-April 15, 2020) in a global crisis pandemic of COVID-19 and in a period of national emergency when thousands of Moldovans must return home from various states of Europe, and the embassies and heads of diplomatic missions are responsible for organizing this diplomatic exercise.

Even though the MAEIE (Ministry of Foreign Affairs) is trying to defend the position of Oxana Domenti, specifying that the current Ambassador is currently Iulian Grigorita, however, the MAEIE should recognize that de jure an Ambassador even if she is on leave does not have the right to work in another position, especially in an international position where in fact this person must represent the interests of the country as an Ambassador.

An Ambassador is considered in office as long as there is no Government Decision, Presidential Decree and Order of the Minister of Foreign Affairs regarding the recall of the ambassador from that position. Or this recall from the position of Ambassador did not exist. Even if we assume that such a request had to exist as of February 15, why Minister Aurel Ciocoi signed an order for leave on his own and did not propose a Government decision by which Ambassador Domenti would have been recalled from the position of Ambassador if she moved to Copenhagen for her new job.

Most likely, the Ambassador wanted to make sure that, if the probationary period did not pass well in the new position in the WHO Regional Director's office in Copenhagen, then she would be able to return to the position of Ambassador of the Republic of Moldova in Geneva.

The most serious fact is that the official residence of the Ambassador of the Republic of Moldova in Geneva was not returned to the real estate agency but was kept with the state money even if no one lives there for 2 months, this money, thousands of euros per month could be redirected to buy medical supplies for the sick citizens of COVID 19, but not to provide them with a warm bed for the Ambassador back to Geneva if the trial period did not pass at the WHO.

Who is responsible for the state spending taxpayer money to make sure Oxana Domenti has an international job?

How is it justified by the Prime Minister, former Minister of Finance and very good friend with Ambassador Domenti these huge unnecessary and illegal expenses in the context of which the provisions of the Labor Code and the Law of the diplomatic service were violated not only by Oxana Domenti, but also by the former Foreign Minister Aurel Ciocoi.